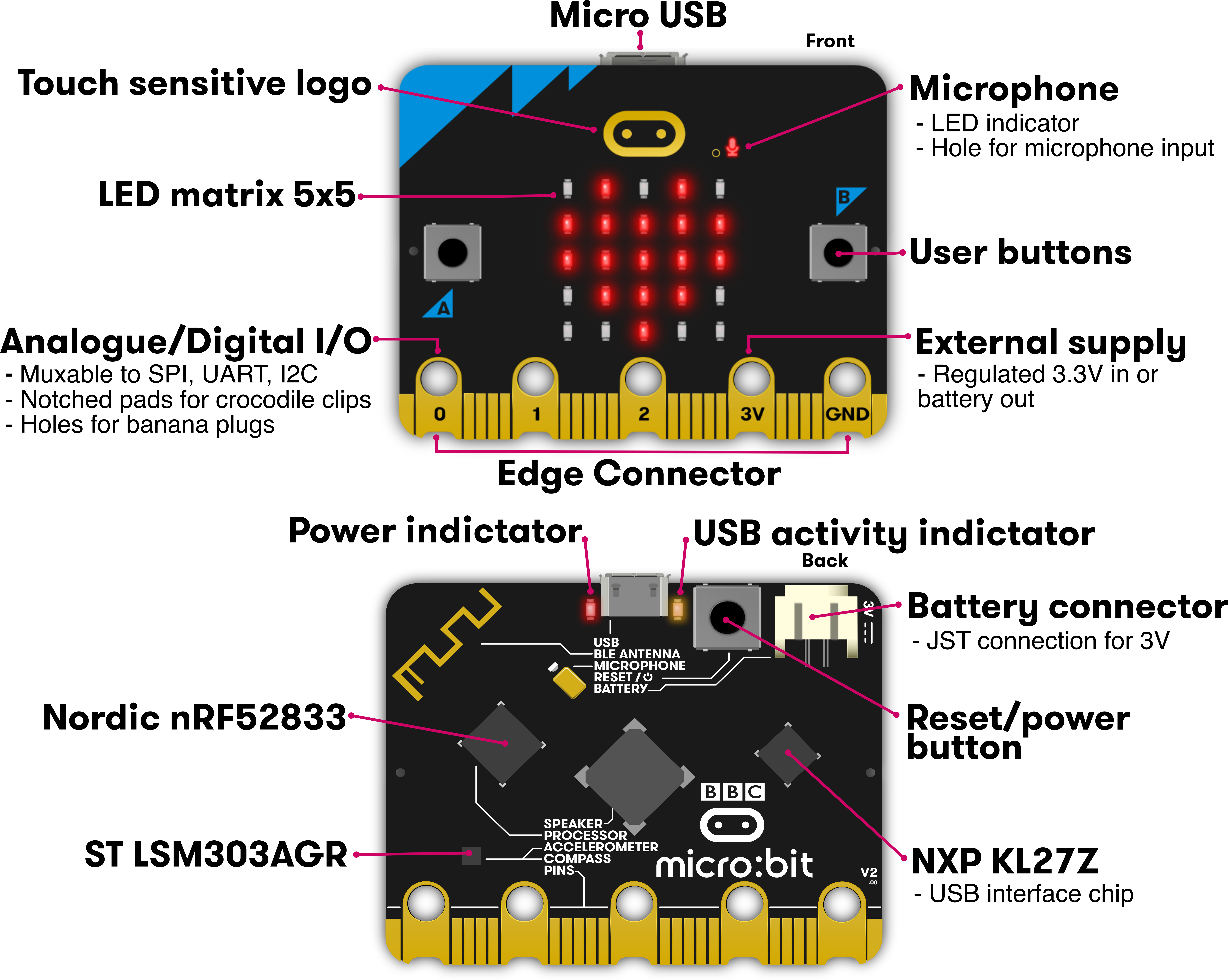 The micro:bit is a Single Board Computer (SBC) that contains an application processor with a variety of on-chip peripherals.Other peripherals are connected to this chip.

The nRF52 application processor is where user programs run. A single, complete application including user code, runtime code and Bluetooth stack is loaded and run directly from on-chip flash memory. All user accessible GPIO pins are provided by this processor. There is an on-board 2.4GHz radio peripheral used to provide Bluetooth and custom radio capabilities via an off-chip aerial.

The on-board 2.4GHz supports Bluetooth communications via the Nordic S113 SoftDevice, which provides a fully qualified Bluetooth low energy stack. This allows the micro:bit to communicate with a wide range of Bluetooth devices, including smartphones and tablets.

The on-board 2.4GHz transceiver supports a number of other radio communications standards, on which we build the microbit-radio protocol This protocol provides a very simple small-packet broadcast radio interface between other devices that support it, such as other micro:bit devices. The ‘radio’ interface that appears in a number of the languages on the micro:bit is built on top of this protocol. Additionally, the micro:bit runtime software adds a ‘group code’ to each data payload, allowing for simple user managed device addressing and filtering to take place.

The two buttons on the front of the micro:bit, and the one button on the back, are tact momentary push-to-make buttons. The back button is connected to the KL27 interface processor and to the NRF52 processor for system reset purposes. This means that the application will reset regardless of if it is powered from USB or from battery.

The display is a 5x5 array of LEDs. It is connected to the micro:bit as a 5x5 matrix. Runtime software repeatedly refreshes this matrix at a high speed, such that it is within the user persistence of vision range, and no flicker is detected. This LED matrix is also used to sense ambient light, by repeatedly switching some of the LED drive pins into inputs and sampling the voltage decay time, which is roughly proportional to ambient light levels.

The micro:bit has a combined accelerometer and magnetometer chip that provides 3-axis sensing and magnetic field strength sensing. It also includes some on-board gesture detection (such as fall detection) in hardware, and additional gesture sensing (e.g. logo-up, logo-down, shake) via software algorithms. A software algorithm in the standard runtime uses the on-board accelerometer to turn readings into a board orientation independent compass reading. The compass must be calibrated before use, and the calibration process is automatically initiated by the runtime software. This device is connected to the application processor via the I2C bus.

The micro:bit has a footprint for two different motion sensors: one made by ST (the LSM303AGR) and one by NXP (FXOS8700CQ). The micro:bit DAL supports both of these sensors, detecting them at runtime. Only one sensor will ever be placed.

The NRF52 application processor has an on-board core temperature sensor. This is exposed via the standard runtime software, and provides an estimate of ambient temperature.

In addition to outputting sound via PWM on the pins, the micro:bit has a PCB mounted magnetic speaker to which sound output is mirrored.

An on-board MEMs microphone provides a sound input to the micro:bit and a built in LED indicator on the front of the board shows the user when this is powered.

The microphone has an external bias circuit of 33K:1K (power to ground) and is AC-coupled to the microphone input pin.

The edge connector brings out many of the GPIO circuits of the application processor. Some of these circuits are shared with other functions of the micro:bit, but many of these extra circuits can be re-allocated to general purpose use if some software features are turned off.

Power to the micro:bit may be provided via 5V on the USB connector, or via a 3V battery plugged into the JST connector. It is also possible (with care) to power the micro:bit from the 3V /GND rings on the edge connector. The 3V /GND rings at the bottom can be used to supply power to external circuits. The board uses an LDO specified up to 300mA, with thermal cut-out for short circuit protection.